Cordyceps in Orient and Occident: Natural History of a Perplexing Parasite and Purported Panacea 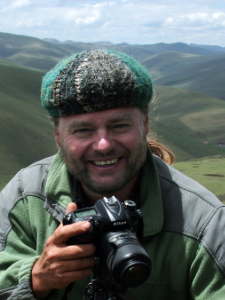 In East Asia the healing power of Cordyceps is in highest esteem, making Yartsa gunbu (Ophiocordyceps sinensis the world’s most precious fungus at over $30,000 per pound, and accounting for 40% of rural income in Tibet. Every year in spring, Tibetans move to the grasslands to collect this tiny, elusive fungus that grows on the larva of ghost moths. Consequently, sustainability is of great concern, but new research helps explaining its apparent resilience. Meanwhile much of Western main stream medicine is not even aware of Cordyceps. Likewise, there are hundreds of different Cordyceps species in the Americas and only in recent years they are receiving deserved attention. The neo-tropics are amazingly rich in bizarre Cordyceps species and Daniel, based on a dozen Mushroaming trips to South America, will introduce the most common and also some rare species, including some Cordyceps, not known to science yet.

Daniel is the author of field guides to Edible Mushrooms of the Pacific Northwest and California (both Harbour Publishing, 2011 and 2012) and co-author of Amazon Mushrooms (2014). He grew up collecting and eating wild mushrooms in the Alps and has been foraging for 20 years in the PNW, sharing his enthusiasm as a mushroom educator and volunteering as Vice-President of the Puget Sound Mycological Society. In his presentations he is combining his stunning photography with an often funny blend of entertaining stories and scientific information; he likes to refer to as “edutainment”. Having been in love with mushrooms since early childhood Daniel managed to bend his career as an ecologist and geographer focused on High Asia towards researching mushrooms and rural income in Tibet, moving on to Cordyceps species in the neotropics. Since 2007 with his travel agency MushRoaming Daniel is organizing mushroom focused eco-tours to Tibet, China, the Amazon, Colombia, the Austrian Alps and the Pacific Northwest, mushroaming.com.